Last Friday afternoon I picked up my son from school and then drove a couple minutes down the road to the closest Chick-Fil-A. While perhaps not the healthiest option, our end of the week trip for ice cream or a milkshake was quickly becoming one of his favorite traditions, and I enjoyed it as well. I ordered a shake, thanked the woman taking my order, and as all Chick-Fil-A employees do when thanked, she replied, “My pleasure.”

This simple two word reply is a hallmark of Chick-Fil-A’s well-earned reputation of excellent service in an industry (fast food) where almost every other business seems to have accepted that great service is an impossibility and has given up trying.

As I sat in my car waiting on the shake, I thought about the connection between the service I had just experienced and a conversation I’d recently had with a small business owner who was frustrated that her people never seemed to act with the level of professionalism she expected.

While I’m sure Chick-Fil-A does its best to hire quality people, I seriously doubt that all those people show up on their first day and every one of them just happens to say “My pleasure” when told “thank you.” No, Chick-Fil-A had to teach its people, even if they were already good employees, exactly how it wanted them to act.

The idea that we, as leaders, should be constantly teaching our people what we want them to do might seem obvious, yet it’s often overlooked in practice. In fact, a common complaint from the owners, CEOs, and other senior leaders we work with, is how frustrated they are that their people don’t do what those leaders expect of them.

That frustration is understandable. As a CEO, you’ve got a way you want things to be done, and it usually seems self-evident to you, and yet so often your people don’t do it that way. Not only is this a source of aggravation, it’s also hurting your business. If only you could get your people to more consistently carry out their jobs in the manner and at the level you expect, your business would be much more productive and much more profitable.

And yet more often than not, while we get all worked up with frustration, we fail to do the sort of effective teaching it takes to close the gap between our expectations and our people’s performance.

Sometimes this is because we’ve misidentified the problem. Too often, organizations look at the situation I’m describing and label it a personnel issue. “If only we could find and hire better people, then they’d do things the way we want!” Other times the problem is grudgingly accepted as simply the nature of the industry. “Maybe other industries are different, but in our line of work, these are the only kind of people we have and there’s nothing that can be done.”

The truth is, the situation we’re discussing is less of a personnel issue (although of course you need good people!) and more of a culture problem. We often say that your true culture isn’t what you say but what your people actually do. How they go about their job, how they treat your customers or clients, and how they work with each other, that’s your culture.

Teaching your way to a better culture

If we recognize that the problem isn’t that we need better people, but that we need a better culture, how do we go about acting on that? The answer is that first we have to define really clearly what we want our better culture to be, and then we have to teach it to our people over and over and over again. Everything we want done, exactly the way we want it done, we’ve got to teach. It really is that simple, even if it isn’t easy.

Behaviors instead of values

So how do you define really clearly what your culture is so that your people know exactly how you want them to behave? The key is right there in that last word, “behave.” Instead of using the conventional mission, vision, and values paradigm, it’s much more effective, when it comes to teaching, to define your culture in terms of behaviors. By behaviors I mean things like “Honor Commitments”, “Be a Fanatic About Response Time”, and “Practice Blameless Problem-Solving”, to name a few examples.

Why is this more effective? Because the increased level of clarity and specificity in a behavior, as opposed to a value, makes it easier to teach, coach, guide, and give people feedback on. After all, if your culture is what your people do every day, it makes sense to define that culture not in terms of what we believe in, but in terms of how we want them to act.

It’s not enough, however, to create a crystal clear definition of our culture based on behaviors and then stop there. Remember, the whole point is for your people to be doing what you want, and so once you define what that is, you’ve got to teach them to do it!

Of course, even once you start teaching, your people aren’t going to get better at doing things how you want them done overnight. To get better, you’ve got to provide them with a lot of repetition. Think of this in terms of anything you’ve ever wanted to get better at, be it an instrument, a sport, or a foreign language. What did it take? A lot of practice! This is no different.

And here’s where so many organizations make a fatal mistake. In order to achieve the amount of repetition necessary, they decide to be “more 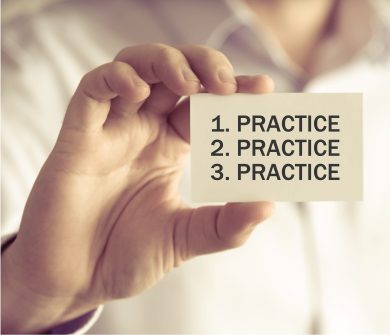 disciplined” about teaching and practicing their culture. Why is that a mistake? How many people do you know who are truly good about being disciplined? Sure, there are a few, but not most of us. It’s why by this time of year the local gyms have emptied out again, our diets are back to their normal less than healthy state, and all those other great New Year’s resolutions we’ve had that we were so determined to be disciplined about have fallen by the wayside. The simple truth is, most people just stink at being disciplined.

So what if instead of relying on discipline, we created rituals to help us stick with our teaching. By a ritual I just mean something that we do almost without thinking or using energy, like a habit. Singing the national anthem before a sporting event, saying a prayer before a meal, and even brushing our teeth in the morning, are all great examples of rituals that allow us to stick with something far longer than we would if we were relying on discipline.

It’s rituals that provide you with a system for teaching your behaviors that is going to last. Rituals keep you teaching and practicing even during the busiest times or even when you shift your focus to other initiatives. They’re the key to making this sustainable.

If you’d like to learn more about how you can develop a culture that closes the gap between your expectations and your people’s performance, shoot us an email, give us a call, or check out David Friedman’s latest book, Culture by Design.