For 89 years, Famous Supply has been a family-owned business, and three generations of Blaushilds continue to serve as the company’s leadership. But when President and CEO Marc Blaushild talks about the Famous family, he’s not referring to his relatives. Since the company opened its doors in 1933, the nucleus of the “Famous family” has been the organization’s staff.

The distribution company, which also has a manufacturing division, now has over 1,000 employees, known as associates. Founder Hyman Blaushild may not have envisioned his business would ever have grown so large. But he would have appreciated the fact that today’s Famous staff embodies the same characteristics as the dozen people he carefully chose for his original team.

Hyman Blaushild (1895-1970) immigrated to the U.S. from Russia in the early 1920s and settled in Cleveland, Ohio, where he used his sheet metal skills to become a contractor. He recognized the need for a dependable distributor to service people in his profession after coping with unreliable supply sources for several years.

Hyman shifted his focus from contracting to wholesale distribution to fill this void and launched Famous Supply in 1933. Even though he started the business during the Great Depression, his small team shared his work ethic and values, and the company persevered.

During the 1950s, Hyman branched out and began to build a network of supply outlets. As he did so, he made certain each location’s staff displayed the same qualities that established the company’s loyal customer base. His son Jay remembered his father as extraordinarily fair and honest, who always reminded him that “material things don’t last, but relationships with people do.”

After college and a stint with the Air Force, Jay made his career at Famous, where he ultimately became Chairman of the Board. He was in his thirties when his father passed away, but not before Hyman had imparted a keen understanding of the business to his son. That first-hand education, and the sense of loyalty and collaboration Hyman had built into the company, gave Jay firm footing to assume leadership.

One of the critical lessons Jay learned from Hyman was choosing the right people to work for the company. Before anyone was using the word “culture” in business, Hyman looked for individuals with characteristics that would preserve the environment that he had created. He told Jay to always watch for drive and empathy when hiring. “That’s all you need,” he said. “Everything else you can learn.”

Jay understood that what Famous had was special after visiting other distributors where the atmosphere simply wasn’t the same. Hyman had established a solid trust between the company and its customers, vendors, and associates. Relationships, he taught his son, are what make it all work.

In fact, the company’s official purpose, posted on its website and other official messaging, is “To build meaningful relationships for life.” 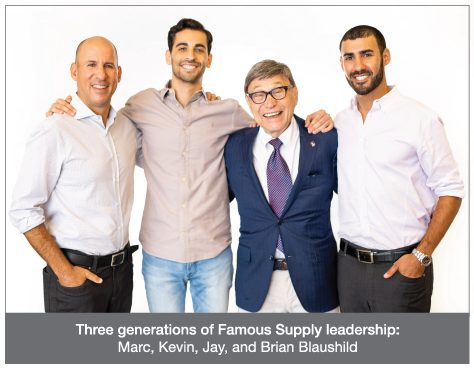 Just as Jay had learned the business from his father on-site and on long drives between locations, Marc Blaushild absorbed the family expertise shadowing his dad and peppering him with questions. He worked in every department to learn as much as possible about the company and began to help orchestrate significant developments.

By the 1990s, the company had grown significantly, and moving inventory was becoming more challenging. In response, they transitioned to computerized processes to build efficiencies, which transformed the business for customers and the team. Computerization also facilitated central distribution, another major milestone.

As they implemented these significant changes, the Blaushilds were careful not to let technology become a barrier between people. Instead, they used it as a powerful tool to build relationships.

A Renewed Focus on Culture

But Marc Blaushild, who became CEO in 2004, sensed the challenge of maintaining cultural standards as the organization expanded. He recognized that as influential as the culture was on the company, it was “ad hoc,” and nothing was documented. Consequently, he began to look for ideas to stabilize and preserve the culture inspired by his grandfather.

The turning point was a Vistage presentation that Marc attended in 2014. Memorably set in the meeting facility at the Cleveland Zoo, Marc recalls watching the elephants through the plate-glass window as he settled in to listen to the event’s speaker talk about corporate culture.

When David Friedman explained that the essence of a company’s culture lies in its staff’s behaviors versus values framed on a wall, Marc realized this was the perspective he needed to establish at Famous.

Friedman, Founder and CEO of CultureWise, went on to describe his eight-step framework to build and improve culture, using a set of essential behaviors that he calls “Fundamentals.” By the end of the talk, it was clear to Marc that a systematic approach was the key to making corporate culture exceptional and sustainable.

Before that “aha moment,” Marc said the notion of working on culture was almost like the elephant in (or just outside) the room. Each leader attending the Vistage meeting knew that culture was a critical part of their business. But no one was sure how to improve it and therefore didn’t address it.

After listening to the presentation, Marc decided to use Friedman’s method to secure and strengthen his company’s cultural environment. He believed this cutting-edge approach to enhance organizational culture would revolutionize Famous as much as introducing computerization.

Rolling Out the Famous Way

Marc Blaushild doesn’t do things halfway. When he embraced the idea of introducing the Fundamentals system at Famous, he committed 100 percent of his people to engage in the introductory sessions.

“At first, we tried to implement the program on our own,” he said. “But after a while, we realized we needed David Friedman’s support. So we engaged his amazing organization, and the process quickly came to life.”

Friedman and his team conducted eighteen, three-hour roll-out programs over several weeks to accommodate the Famous workforce. Marc attended every session—fully accepting that as CEO, he was also the Chief Culture Officer. “That’s when the momentum took off,” he recalls.

“I’m proud to say that within 60-90 days, we not only documented our 40 Fundamentals for Living the Famous Way, but we rolled it out to all our associates. Looking back, we could not have been successful going it alone. We needed David’s leadership and he was committed to be with us every step of the way.”

After this enthusiastic introduction to the Fundamentals program, the company began to participate in the rituals vital to its success.

Right away, the Fundamentals became part of and set the tone for each meeting throughout the company. In addition, everyone took part in weekly quizzes that helped people think about putting the Fundamentals into action. And managers used the program’s coaching guide as an important development tool.

The Sunday night message about the Fundamental of the week has become one of the most impactful rituals at Famous. Marc wrote the first round of insights, in which he shared his thoughts about the behaviors that define the company. Subsequently, he asked other members of his leadership team to contribute their perspectives.

Now all associates are invited to be part of the cycle to develop weekly messages. In recent years, they began to film short videos about the Fundamentals instead of writing insights. The company is so proud of these personal commentaries that they post them on the Famous website. And people love doing it—almost 200 associates have volunteered to create messages to date, deepening employee engagement.

Marc notes that Famous draws job seekers because the company’s culture has an outstanding reputation. The Fundamentals are also a critical part of the organization’s staffing process. The HR team uses them to help select people who will thrive at Famous and also to strengthen recruits’ connection to the company during the onboarding process.

The Impact of the Fundamentals 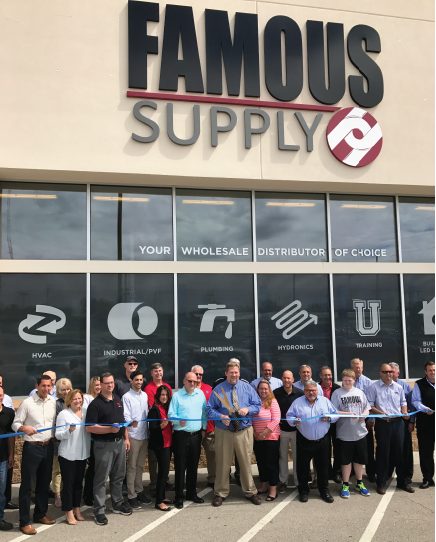 Famous Supply currently has outlets in fifteen states, and Marc Blaushild forecasts continued growth. But he isn’t worried about the culture being diluted with the expansion.

“If you have a good manager setting the tone at a location, and that leader believes, lives, and practices the Fundamentals, you’re going to have a great culture at that branch no matter how far away it is.

From a cultural standpoint, I see the company getting stronger. Of course, more people and locations pose challenges, but the Fundamentals foundation just keeps getting deeper and better. I’m confident that it will help us grow, make us more successful, and continue to improve the lives of our associates.”

One indication of the program’s success is the company’s low turnover rate. People love working at Famous because the culture is so positive. As Marc is proud to point out, Cleveland’s Plain Dealer has named Famous one of the area’s top workplaces for eleven years in a row.

The company even won this distinction in 2020 as the pandemic raged on. While Famous was able to continue operations because it was categorized as an essential business, the health crisis posed significant new obstacles. The Fundamental system, Marc says, was the “North Star” that helped keep everything in alignment during a very challenging period.

The company’s culture continues to influence every part of the Famous operation, which now includes a new generation of Blaushild leadership—Marc’s sons Brian and Kevin. In Marc’s opinion, the far-reaching effect of the Fundamentals filters through to the bottom line.

“I would probably point to the Fundamentals as the most important thing we’ve done at Famous,” Marc notes. “We always had an amazing culture, but the Fundamentals allowed us to make it so much more actionable.”

Asked to name his personal top three of the forty Famous Fundamentals, without hesitation, Marc identifies:

Not surprisingly, these are the same qualities that his grandfather and father prized in the company’s early years. Today, they have new power and relevance through the Fundamentals.

All the behaviors defined in the Fundamentals program help strengthen the Famous family. As Marc puts it:

“At our company, we’ve always put our associates first. The Fundamentals help all of us be at our best, which enriches our relationships with our customers and vendors. To us, it’s all about the people and how we work and connect with one other. Nothing is more important than that.”

Scroll to Top
At CultureWise, we respect your concerns about privacy and value the relationship that we have with you. We use cookies to ensure that we provide the best possible experience on our website.Ok, thanks!Privacy policy